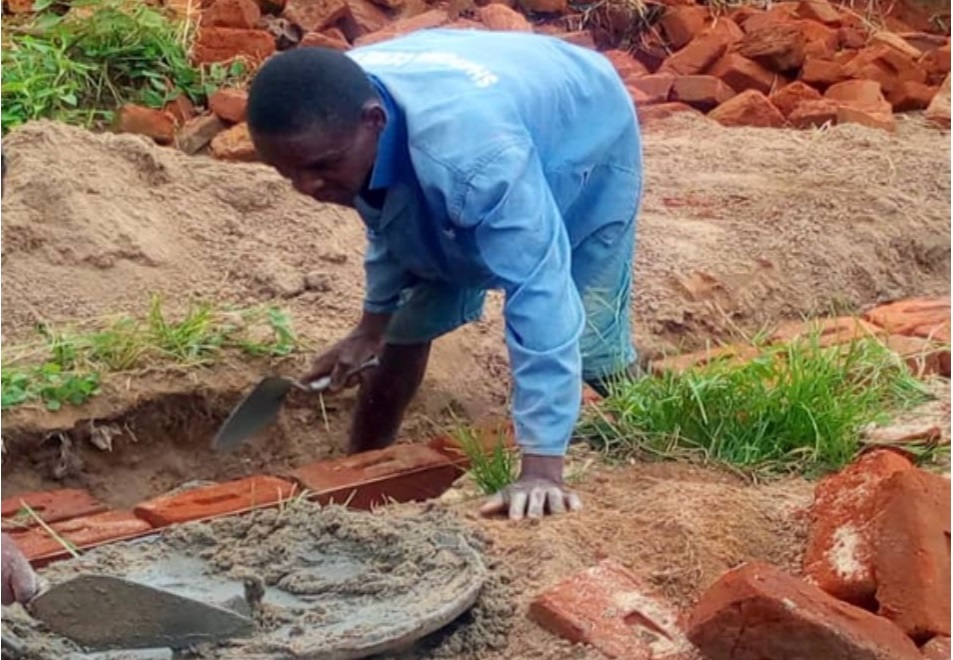 Moses Nyondo captured at one of the construction sites

Moses Nyondo is a third born son in the family of Mr & Mrs Clifton Nyondo of Chakwela Village T/A Kilupula in Karonga District. He has 5 siblings, all ladies. His father died in 2013, when he was only 18 years old.

His mother, now 45, depends on cultivation of cassava and rice as a source of income to support the family. However, with dwindling production, due to climate change effects such as flooding and dry spells, she has not been able to produce enough to raise enough money for the household to adequately meet the needs of her children including school requirements.

When asked during the monitoring exercise for the vocation skills project under Karonga Diocese’s Education Desk, for which Moses Nyondo is a beneficiary of Brick laying, he had this to say.

“I was forced to drop out of school because my mum could not afford to support us in school. At the same time, she needed support in the garden for us to produce enough food for the family.”

“Being the eldest child in a 7-member family, I took up the responsibility of my father. His responsibility was big on my shoulders and it often required me to be active hence I was with mum in the garden and searching for piece works in other people’s fields to supplement our income,” said Moses.

Moses, with a sad face told the monitoring team that despite all his efforts to see that his siblings have enough food and basic needs at home, the family was still experiencing food shortages. He calculated that their average monthly income through agricultural piece works was not more than MK 15,000 per month.

The story of Moses Nyondo started giving hope when he narrated that in March 2019, he was informed by the Village head that Karonga Diocese through the Education Desk would institute a community based vocational skills programme in the area targeting school dropouts, widows, orphaned kids and child headed families. He did not hesitate but immediately wrote an application letter to be enrolled for brick laying and he was picked and finished his training in July 2019.

Soon after training, Moses and his 3 other friends from brick laying trade formed a group and started looking for piece works in construction in the area and their efforts were not in vain.

“We formed a group of 3 and we work together on construction projects within the community. We have been given contracts to build houses, churches, tombstones, house repair works, house flooring and plastering. Every month, each member of the team gets an average of MK 45,000,” said Moses.

The family of Moses has a happy story now as they supplement the MK15,000 they were getting from agriculture with MK45,000 from brick laying skills acquired through the project.

According to Moses, the family is now able to provide school requirements for his sisters and food in the house. He aims to go further with his brick laying skills by enrolling with Miracle Technical Institute in the years to come and later establish a construction company.

Moses thanked Karonga Diocese for the project which he described as transformational but asked the project team to further lobby for startup tools for the trainees as many struggle to pick themselves up from the ground based on their family background.