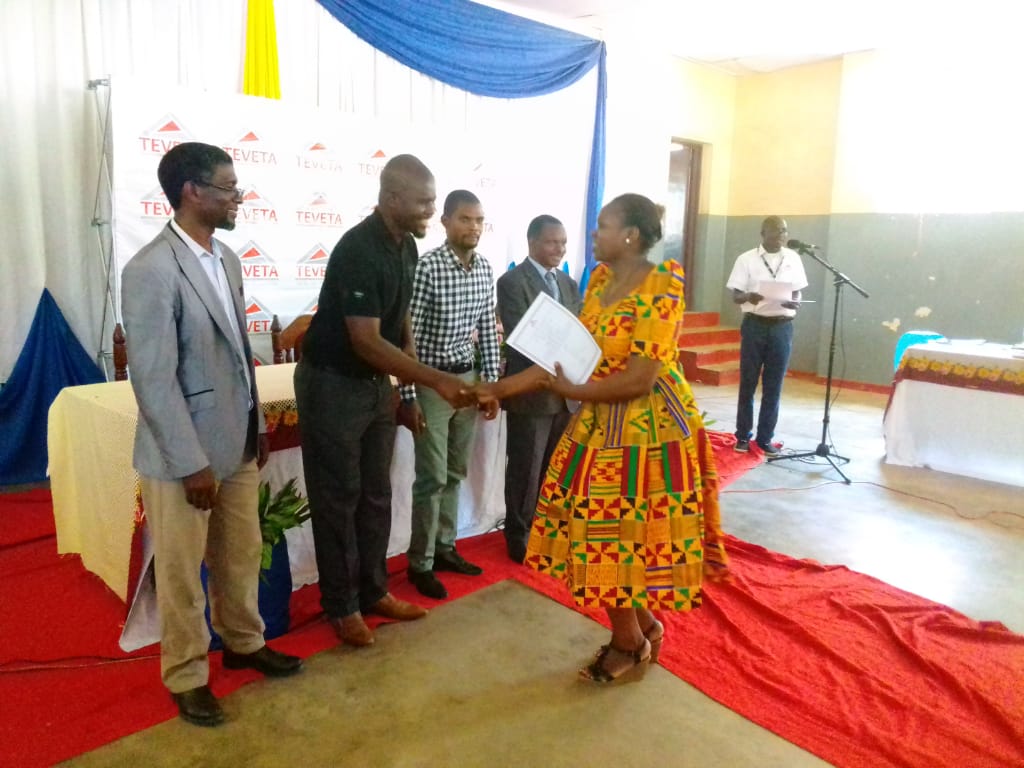 One of the participants receiving her certificate

142 youth from violent prone areas in Karonga, Rumphi and Chitipa districts have been awarded certificates for successfully completing a six months course in the fields of Carpentry and Joinery, Brick Laying and Tailoring, Fashion and Designing.

Caritas Secretary, Mwawi Shaba says Karonga Diocese through the Bishop Martin Mtumbuka planned to reach out to many youths who would have been left out by the formal vocational training programmes.

“A greater part of the country’s population is occupied by the youth who have nothing to do hence they opt for violent acts particularly in Karonga. This initiative, therefore, was also meant to groom the youth to become reliable citizens of this nation,” Shaba said.

He further acknowledged the sister of  Archdiocese of Bamberg and Archdiocese of Freiburg in Germany for their support towards the training of about 142 youths who have received certificates out of 150 that were enrolled. They were drawn from Chiweta, Mwenilondo, Mpata, Pusi-Chakwera and Mwanjawala communities.

He pleaded with the TEVETA Executive Director to organize a further training for the graduates to have skills in entrepreneurship so that they are able to sustain themselves through the sale of their products.

Speaking on behalf of the graduating students Phillip Mwangolera commended the initiative by the diocese to train them to become good and self-reliant citizens through the skills they have acquired.

“I was one of the most trouble makers in Mwenilondo who could accept bribes from organisers of violent acts to incite violence, but now I have something to fend for myself and relatives. My plea to the Diocese and TEVETA is that this should not be a once off initiative,” said Mwangolera.

However, the District Youth officer for Karonga who represented the District Commissioner, Lapken Liwago stressed on National Youth Policy which stipulates that young people must be empowered economically. He hailed the Diocese and TEVETA for adding value to the policy.

TEVETA Executive Director, Wilson Nkhoma said he is pleased to have partnered with the Diocese to train the youth in various vocational skills. Above all, he commended the trainers for tirelessly training the youth through competent-based skills, who were also trained further to become competent trainers.

“As TEVETA, we believe that the youth can employ themselves through vocational skills and become self-reliant if they can put their heart and effort on such skill without actually advertising themselves but through quality products,” said Nkhoma.

Speaking on behalf of the Bishop of the Karonga Diocese, the guest of honor during the graduation event, Father Cyprian Ngoma of Kasantha Parish said unemployment rate is high leading to moral decadence among the youth. He said the Church believes that the graduates will now become instruments of peace in the society.

Father Ngoma added that the Diocese has only given them an eye opener by giving them certificates but the journey to achieve their goal still remains in their hands.

150 Youths to Benefit from Community Based Vocational Skills Project