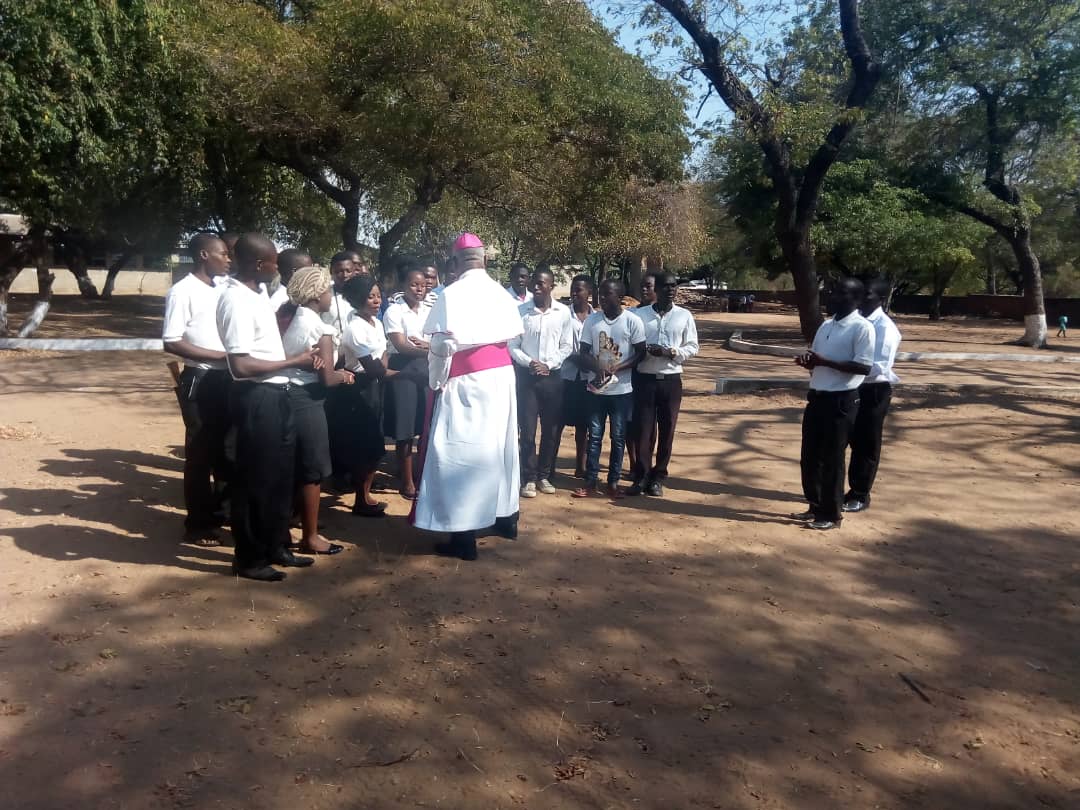 'Let no one look down upon you because you are young,' Bishop Mtumbuka

Bishop Martin Anwel Mtumbuka of the Diocese of Karonga, on Monday exhorted the youth of the Diocese, who gathered at Chaminade Secondary School for Youth Rally, not to let anyone look down upon them because they are young.

The Bishop, who had a special audience with the young people from all parishes of the Diocese, based his talk on 1 Timothy 4:12 saying Paul’s words to Timothy are still relevant to the youth of this generation.

In this verse, Paul encourages Timothy to be stand firm and not to allow himself to be undermined by people because of his youthful age. Reflecting on this verse, the Bishop said like Timothy, young people are the future of the family, the Church and society.

“I would like to see you, young people, playing some roles in the socio-economic and pastoral areas in the Diocese. We see you as a great blessing, after all you constitute a bigger percentage of the population of this Diocese” said Bishop Mtumbuka.

On Missio Ad Gentes, the Bishop applauded young people for taking initiative in motivating the lapsed and encouraging their fellow youth to come back to Church. The youth have also been engaged in the proclamation of the gospel, works of charity and promotion of justice and peace.

“My children, we freely received the faith we profess, so we must also share it freely. I am filled with sincere gratitude that you have done a lot in helping your fellow youth, the sick, the aged, the underprivileged and those who do not know God,” said the Bishop.

He urged them not to be satisfied with what has been accomplished so far, as it is not the end. He commissioned them further to go to all corners of this Diocese and encourage their friends to come back to God.

Speaking on behalf of the youth, Diocesan Youth Chairperson thanked the Bishop for sparing time to listen to their concerns. He requested that such meetings be held every year.

Some of the concerns raised were lack of sufficient learning and teaching resources in school, limited time to be with priests in their prayer centers, conflicts in families and villages and ‘unfair’ selection of students to Catholic secondary schools in the Diocese.

The Bishop assured the youth that he will address some of the pertinent issues as they touch on the social and pastoral life of the youth.

During the rally the youth group called “Youth to Youth Dancing Missionaries”, instituted by the Bishop five months ago, had their first ever stage performance. They are still in the process of preparing for outdoor activities.

The Youth Rally, which attracted 416 representatives from prayer centers, was held from 24th to 27th August, 2019. The rally opened with Holy Mass presided over by the Vicar General of Karonga Diocese, Mons Denis Chitete. Concelebrants were The Diocesan Youth Chaplain Fr. Cosmas Mwanjawala and his Deputy Fr. Nelson.

After the closing Mass, five girls and five boys graduated from the youth stage. The ten bade farewell to their friends as they will be receiving the Sacrament of Holy Matrimony. The pairs came from the following parishes; one pair from St Anne’s, another from St John Paul II and three from Immaculate Heart of Mary/ Chisankhwa.