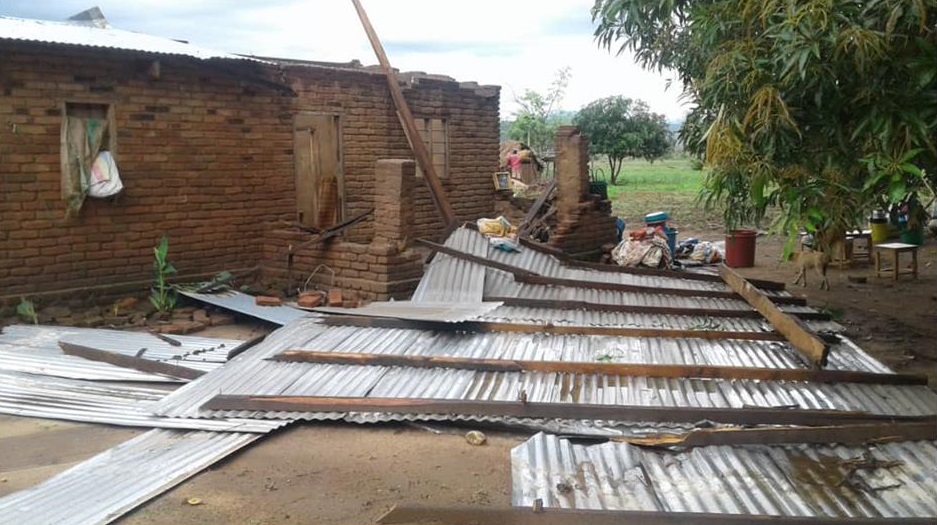 From the month of November 2019 to April 2020, Karonga District experienced heavy rains and strong winds, which led to many families being displaced either because of floods or roofs of their houses being blown-off. The children and the elderly are the most affected.

The floods washed away household assets such as; food reserves, livestock, beds, beddings and kitchen utensils. The strong winds blew off the roofs from many houses and in some cases literally destroyed the houses.

The victims of the floods and strong winds were re-located to a few camps which the government and some non-governmental organisations created in the upper lands.

Even though some of the victims have gone back to their homes, there are many who still live in the camps. These camps are generally congested. This means that the occupants are prone to communicable diseases due to poor sanitation. Some camps do not have enough toilets, posing serious health challenges to the occupants. The people sleep without mosquito nets and this is exposes them to malaria, which is the highest cause of deaths especially, among children and elderly in Malawi.

Even before the closure of schools due to the COVID-19 pandemic, the floods affected the education of school-going children because some of them were locked in the camps when it was too dangerous for them to walk to school. On 10th march, one school pupil was swept away by the flood water on his way to school in Kalongolera Village in Karonga District.  His dead body was recovered after several days. On the other hand, some schools were being used as temporary camps for the victims of the floods which meant that most school activities had to be suspended.

Just like children in the flooded areas were not able to go to school, the same children and their parents also found it difficult to go to church to pray. So, Church attendance during the same period dropped drastically.

In my opinion the recovery programme to the victims of the floods and strong winds ought to be twofold: material and spiritual.

At the moment, some of the materials that are immediately required to support the affected families include; food items (maize, beans, cooking oil), mosquito nets, chlorine, clothes, tents, beddings, cups and plates, mats and mattresses.

In the long term, many families need help to reconstruct their houses while some families may need to be relocated.

Spiritually, the victims of the floods and strong winds need a lot of prayers and accompaniment. Some have lost faith in the Good God.

Romans 8:31”What shall we say after this? If God is with us, who shall be against us?”

We hope and pray that the religious leaders, government and other well-wishers will find ways of materially and spiritually assisting the victims of the floods and strong winds to recover and return to their normal life as soon as possible.

Here-below are some of the photos of the situation in Karonga.