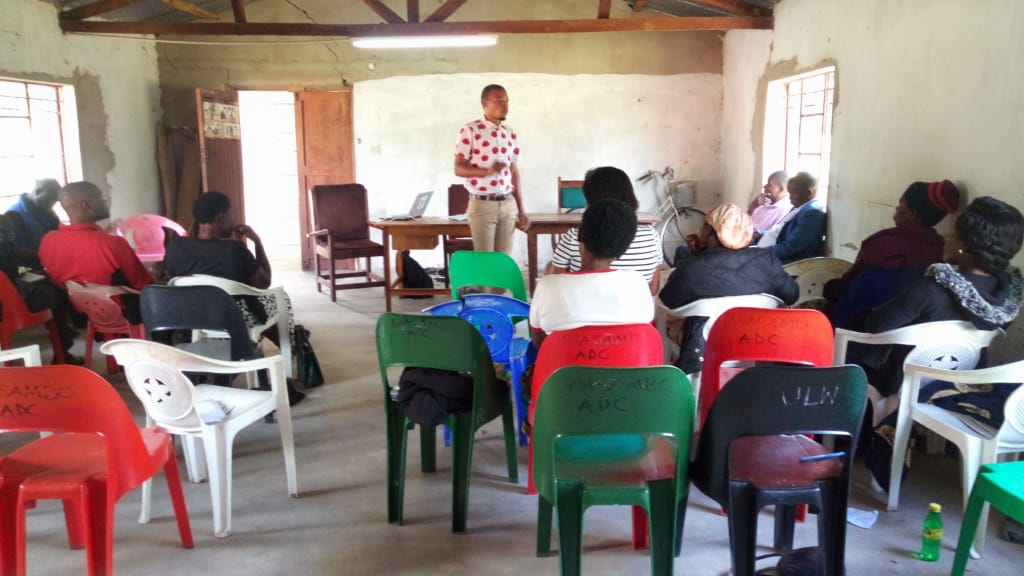 Vincent Bwinga facilitating during the meeting

Justice and Peace Desk Project Coordinator for the Women Empowerment Project Vincent Bwinga says it is pathetic that most Malawians are not aware of the laws that promote gender equality because the government has not taken any measure sensitise the masses on the same.

Bwinga says the laws such as Marriage, Divorce and Family Relations Act and Gender Equality Act were enacted to empower women to take an active part in personal, household and community development.

He further says absence of awareness on the same is a major obstacle to the effective implementation due to limited ownership of the laws by citizens. Such laws, he said are unsustainable.

Bwinga said this in the areas of Traditional Authorities (TAs) Wasambo and Mwirang’ombe in Karonga District where the Justice and Peace Desk drilled Ward Councillors, Area Development Committee and women group leaders in gender laws.

“As Justice and Peace Desk we would like to urge communities in the areas of TAs Wasambo and Mwirang’ombe that they should know the laws that promote gender because development does not exclude women or people with disabilities and we are complementing government’s efforts in providing awareness on the new laws,” said Bwinga.

Wasambo ADC Development Supervisor  Glad Lukhere  who is also the secretary has described the meeting as very relevant to the committee because it has provided new strategies on handling developmental projects that would help to uplift women in the community such as providing loans for small scale businesses.

Lukhere added that it is their duty as ADC members to help in civic education about the relationship between gender laws and development.

“I would like to thank CCJP for we have been reminded on gender laws therefore this will help us when planning for development projects in our community,” explained Lukhere.

Nyungwe Ward Councilor Ethel Mwanza says she is ready to transform the area under her jurisdiction and make sure the developmental projects are gender responsive.

“I am the only woman in Karonga District who has been elected Councillor this year. Therefore, I am the voice of all women in the District at the Council. I will make sure that budget allocation on development should not only support men,’’ said Mwanza.

The Justice and Peace Desk of the Diocese of Karonga is implementing Women Empowerment Project with financial support from UN Women through the Episcopal Conference of Malawi.

Children Call for More Protection and Support in their Education