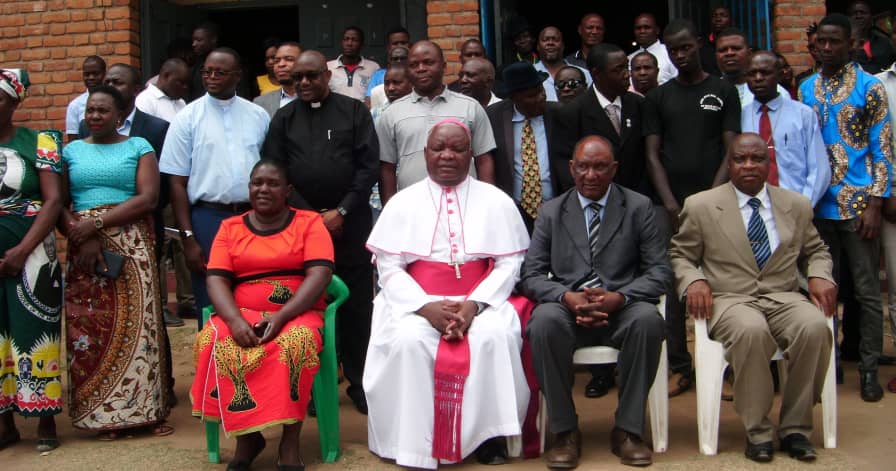 Participants to the Stakeholders Peace Conference

Bishop Martin Anwel Mtumbuka of the Diocese of Karonga has called upon all people in the country to rise above party politics when discharging their duties in a just manner if peace is to prevail in the country, saying there cannot be peace in a country where there is no justice.

Bishop Mtumbuka made these remarks on Friday at St. Mary’s Hall in Karonga District at a stakeholders’ peace conference he held aimed at finding lasting solutions to political tension in Karonga and Chitipa.

The meeting comes on the sidelines of waves of continued demonstrations that have seen the angry demonstrators setting ablaze the District Commissioner’s office and looting a lot of public property.

“I would not blame the president for all this political turmoil that is unfolding in the country. People elected Members of Parliament who are supposed to be on the ground controlling situations when they turn ugly.

“Surprisingly, they are nowhere to be seen. This is why people are complaining 100 percent, people are angry because there is too much corruption, segregation, social injustice and with that, peace cannot prevail,” the Bishop said.

Speaking on behalf of the Paramount Chief Kyungu, Traditional Authority (T/A) Kalonga hailed the Bishop for the meeting that brought together critical players in the district who can bring peace and build the district.

Taking his turn, one of the youths from Lupembe, Davie Kittalo said there is need for the county’s leadership to create job opportunities for the youths as many young people are jobless.

“If the youths were given jobs, they would be busy and they would not have time to engage into actions that are retrogressive in nature,” Kittalo said.

Reverend Simeon Banda of Livingstonia Synod of Karonga CCAP heaped the blame on the county’s leadership, saying since the political tension started escalating, the country’s President has been quite.

“During Pharaoh’s reign, people lost livestock, lives and property because of his stubbornness. It is therefore, imperative for the President (Arthur Peter Mutharika) to come out in the open and condemn the barbaric acts perpetrated by some party zealots and start preaching peace,” Reverend Banda said.

150 Receive the Sacrament of Confirmation at St Anne’s Parish