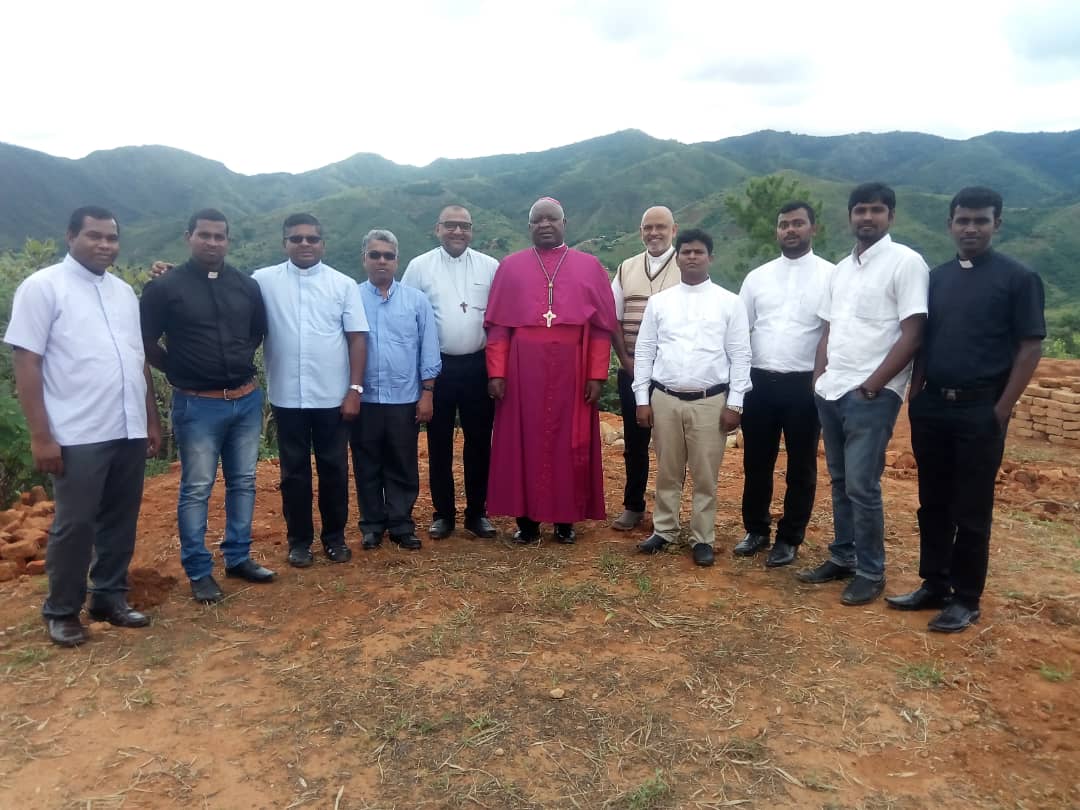 Bishop Mtumbuka with the team of Missionaries after the official handover

The New Parish had been a sub-parish under St Anne’s Parish for almost three years before it was raised into a full parish with the prospects of the coming of the Missionaries of St Francis De Sales from India. The parish is at Livingstonia (Kondowe) to the eastern side of University of Livingstonia in Rumphi District.

In his sermon, Bishop Mtumbuka highlighted the significance of gazing at Christ in every dimension in life. He stressed that life without Jesus is empty and complete vanity.

“Most of the people in this area, I also happen to come from this area, do believe in charms. These cannot help any of you to come to Jesus and have fuller life. Belief in things that have been made by human power is absurd and a contradiction to the faith that we received from the apostles,” said the Bishop.

In the same celebration, Bishop Martin called upon everyone that the dream of establishing a parish at Livingstonia has been realized. He repeatedly invited all the faithful to continuously thank the Lord for this gift which in a way is in tandem with the Diocesan motto “We Shall Go to Them”.  On the other hand however, He reminded all the faith full that the dawn of the parish seeks their cooperation so that the parish develops to a fully fledged stance with respect to the faith and infrastructures.

As a way of reaching out fully to youth ministry, Bishop Mtumbuka appointed Fr. Cosmas Mwanjawala as a Diocesan Youth Chaplain and Father Nelson, MSFS as his deputy. The two assumed office with immediate effect. Fr. Nelson was particularly charged to take care of the students at the University of Livingstonia and technical college. The former Youth Chaplain, Father Matthews Simwela, remains PMS Director for the Diocese.

Taking his turn, the Superior General for the Missionaries of St Francis De Sales Father Abraham Vettuvali patted the Diocese on the back for inviting them to come in the Diocese and open a mission.

“My dear ones, let us always remember that Jesus the Son of God was the first Missionary. He left heaven and came on earth to be with us. He obeyed the will of his Father to come on mission. We as missionaries are doing the same thing, following the footsteps of our master,” said Father Abraham.

Father Abraham was accompanied by the General Councillor of Mission Father Johnson Kalludickal, the Provincial Father Ignacimuthu, Councillor Father Amirtharajan. Three other priests who will join the Malawi mission present at the function are Fathers Berin, Sathish and Arockiadoss. The three pioneer missionaries to Malawi who are running the parish are Fathers Susairaj, Anatharaj and Nelson.

The Mass marking the launch of the new Parish was concelebrated by sixteen priests among whom were the Pastoral Secretary Fr. Joseph Sikwese, the Judicial Vicar Fr. Steven Bulambo, the Director of Finance Investments and Administration Fr. Cecilio Silwamba and Father Matthews Simwela who until their coming was Acting Parish Priest for the Parish.

St Francis De Sales has about 2500 Christians and 75 Catechumens.

Karonga Diocese Has One New Priest