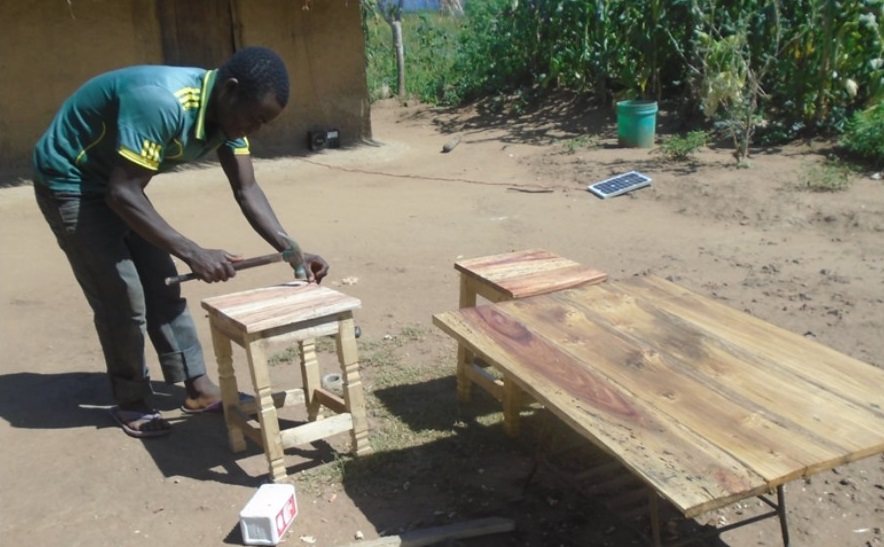 Jimu Msukwa hails from John 1 Village in Group Village Headman Mwenechipwela, Traditional Authority Mwenemisuku in Chitipa District where he was born and raised. Jimu lost his father while he was very young and has been brought up by his mother only.

“I cannot remember when my father died because he died when I was very young”, says Jimu Msukwa. “I only went as far as grade 8 since my mother could not provide adequate support to me,” he lamented.

Jimu Msukwa was one of 8 carpentry professionals trained in the area with assistance from Integrated Rural Development Project under the Development Desk of the Diocese of Karonga. After graduating, he set up his own carpentry shop where he does his trade. He is the only reliable carpenter in an area of 4 villages.

He says that he has managed to buy three pigs and he has also assisted in buying iron sheets for his mother’s house.

“When I was enrolling for the carpentry skills, I thought it was a joke. But now I am enjoying the fruits of the project,”

“I am now able to help my mother and my relatives through the skills acquired from this project and I will live to remember. I really thank the project for transforming my life,” he said.

Integrated Rural Development Project, which is being implemented with support from Misereor Germany, has so far empowered 12 professionals in tailoring, 8 in carpentry and 7 in brick laying in three villages development areas of Kapoka, Chipwela and Samchipwela.

The training was held at Chipwela Trading Center, in Traditional Authority Mwenemisuku in Chitipa District. The training was provided on community based approach and was run for 6 consecutive months from mid-June to December, 2018.