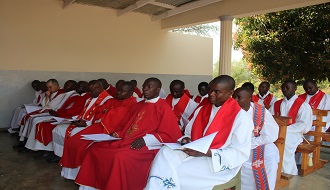 On 15 August 2017, during on open community human right debate in his village which was organised to raise awareness of community members and to enhance their knowledge on women and girls’ rights, SGVH Mfinda pointed out that drinking behavior among  men encourages women abuse in many families in Wenya.

The SGVH took his time to rebuke this  behavior and ask all men to be responsible in their families so that they can improve their living standards.

Through this event, CCJP learnt that men  are afraid to lose power to their female counterparts thus they violence to intimidate and control women.  During the activity women were encouraged to take up challenging opportunities and embark in several income generating activities to self-sustain their living.

Community members at the event hailed CCJP for the efforts to promote women and girls rights and they said that since January 2017 there has not been any child marriage that has occurred in the area.

This activity was organized by Justice and Peace Desk of Karonga Diocese on Community Managed Women and Girls’ Rights Advocacy project which is being implemented in Chitipa district in Traditional Authorities Mwenewenya and Nthalire with Catholic Agency for Overseas Development (CAFOD).The project goal is that wellbeing of vulnerable women in rural Malawi is promoted.

A similar activity is scheduled to take place in SVGH Mpalashawa on 16 August and in Chisenga on 17 August 2017.