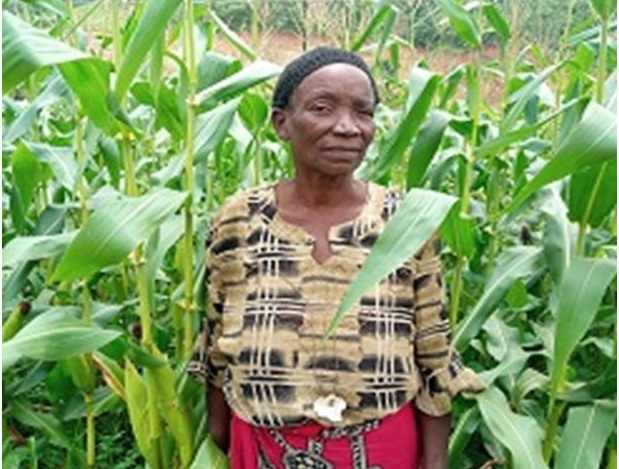 Grace Mkandawire of Hanania Village aged 64 is an old woman living with her husband Steven Usipa aged 69. God blessed them with 4 children and 5 grand children (M3, F6) and their 3 daughters were married but returned home, to live with them, when their marriages failed. Both hail from the same village, Hanania, Traditional Authority Kachulu.

Grace Kandawire and Steven Usipa are participants in (Access plus) A+ Project which started in October, 2019 and fall under a criterion of elderly people. The couple is among elderly families living in Hanania Village. Grace and her husband depend on farming for their own and livelihood of their daughters and five grandchildren.

In spite of their old age, Grace and Steven attended almost all training sessions organized by the project. In that way, the project assisted them with 2 kilograms of new variety of beans, known as NUA 45, which they planted in December, 2019. Grace intercropped the beans with maize and planted on an acre of land. The family grows other crops such as Cassava, Sweet potatoes.

Grace Mkandawire thanks the project for coming with such initiative of supporting farmers with certified seeds which have approved already high yield. This was the first time for the family to grow high yield variety of beans which matures in 60 days. From the 2 kilograms of NUA beans she planted, Grace expects to get between 80 and 120 kilogrammes of beans. The family plans to plant more beans during winter cropping for food and commercial purposes.

“Relish will not be a challenge any more this year since we will have lots of beans,” said grace.

A+ Project, under the Development Desk of the Diocese of Karonga, gives hope to more families, like that of Grace Mkandawire, who have seen the goodness of planting certified seed and follow instructions from field officers.

The project procured NUA 45 bean seed to support such old vulnerable families who are also keeping grand children and orphans in their homes. Grace actively participates in all the interventions being implemented in the area by the Diocese of Karonga, namely; irrigation, livestock pass on, village saving and loans (VSL) and Conservation Agriculture (CA) just to mention a few.

Grace Mkandawire hails A+ Project for applying this approach, known as Strength Based Approach which really will change the mindset of their fellow farmers in the community who fix their mind on handouts unlike putting their energy and efforts on crop production.

Steven Usipa, the husband to Grace, also belongs to a group called Tiwonge Village Savings and Loan group which has 26 members (5 males and 26 females). The grouping was established by the A+ Project in March, 2019.

The Karonga Diocese – development desk with funding from Caritas Australia is implementing a 3 year A+ project within Traditional Authority Kachulu and Mwalweni in Nchenachena Extension Area, Rumphi District.