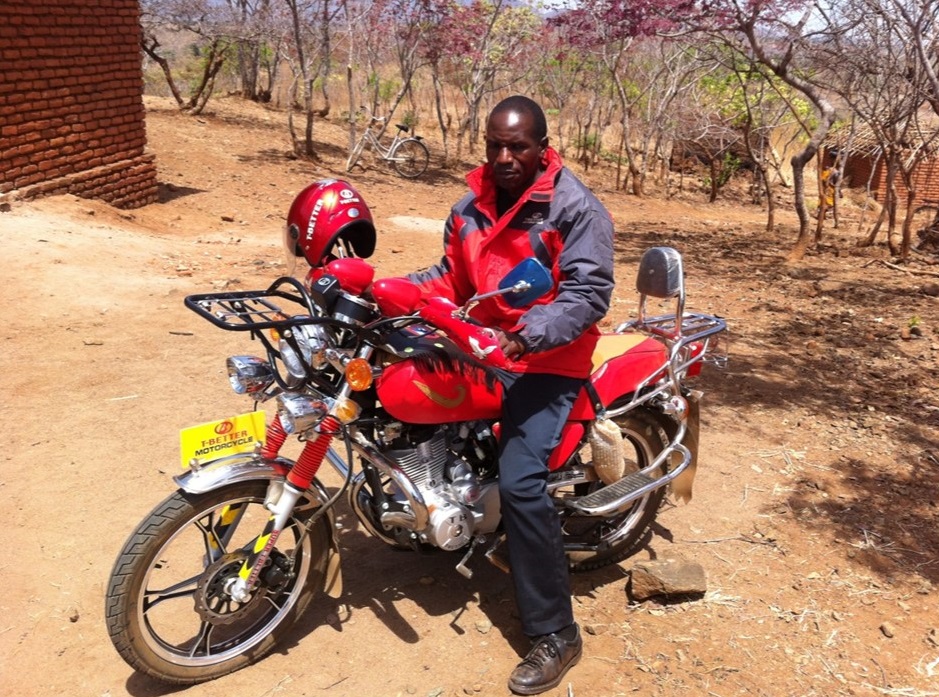 Mwamphashi during one of his test ride trips

Mwamphashi is one among several farmers enjoying the fruits of joining Farmer’s Club which later turn to operate in Collective Marketing with many other farmer clubs.

In September 2019, Karonga Diocese through its Development Desk initiated collective marketing which aimed at bringing farmers together for collective bargaining power when buying agricultural inputs and selling agricultural produce.

In October 2019, Mwamphashi managed to buy a motorbike from the proceeds of crop sales. With the aid of collective marketing, he sold about 2,800 kilograms of surplus maize at a price of MK270 per kilogram against a prevailing market price of which is below MK200 per kilogram. The total revenue he realized was MK756,000 to which he added some money raised from livestock sales to get MK800,000, which was the cost price of the motorbike.

Mwamphashi is now living a happily life having acquired a means of transport which will ease mobility as he is comes from a typical remote area where transport is one of their major challenges.

The family of Mwamphashi applauds to the initiative by the Karonga Diocese saying, “It has come to empower the community economically” unlike in the past when they could carry their produce to a bordering country Tanzania with no say on the price offered by traders.

Collective marketing has proved its goodness to farmers in T/A Mwabulambia who for the past years have suffered a lot when accessing agro-markets such that their only choice was Isongole in Tanzania.

Many farmers have been victimized with tricky traders where most available markets are marred with intermediate traders who offer below standard agricultural inputs and low prices for farm produce.

With support from MISEREOR the Diocese of Karonga through its Development Desk is implementing a 3 year Integrated Rural Development Project in Karonga and Chitipa districts. Improving household economic level is one of the operational objectives, of which Farmers Collective Markets is a leading indicator. The project is targeting a population of 2,400 households in 4 traditional areas of Kyungu in Karonga, Mwenemisuku, Mwabulambia, and Mwenewenya in Chitipa.