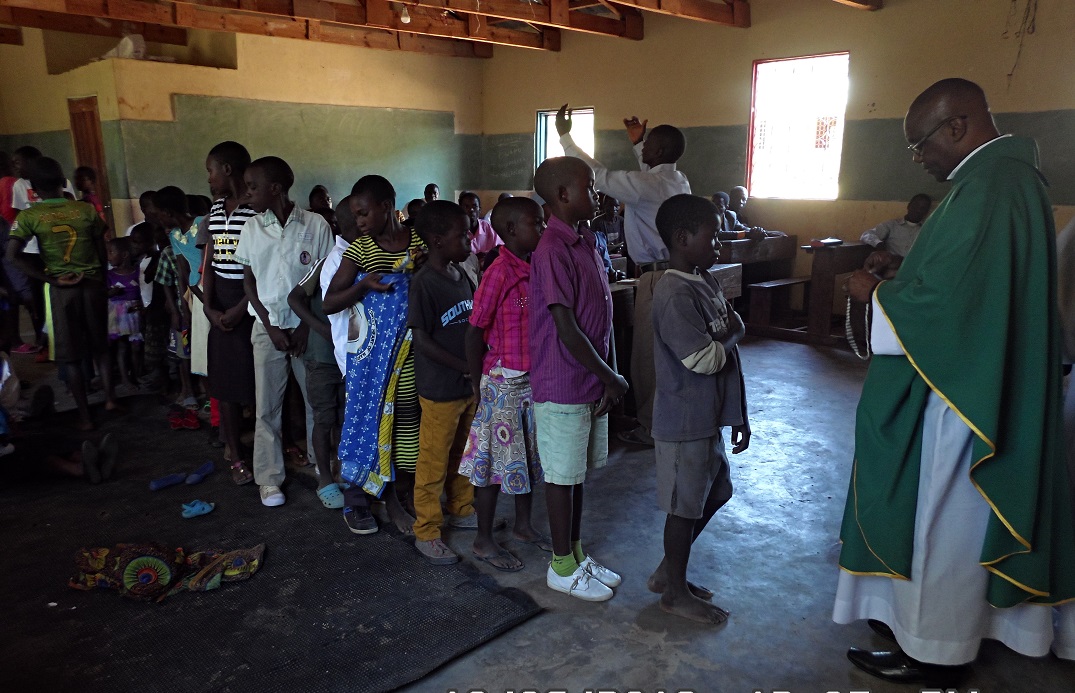 Juma Catholic community is one of the fruits of visiting un-evangelized areas that was done about two years ago (in 2016).  The small Catholic community at Juma has continued to grow since its establishment during the first visit.

Juma is located in the hilly forest that is to the south-east of Kayerekera Uranium Mine site.  It is extremely difficult to reach the community by vehicle, since only special four-wheel drive vehicles can make it on the difficult terrain and undeveloped paths to Juma.

The Vicar General went to Juma accompanied by some Catholic Christians of Sere Kayuni Prayer Centre, to which Juma Catholic Community is attached as a small Christian community.  Travelling to Juma was not all smooth as the 4×4 vehicle still got stuck in one of the running rivers that is full of sand.  The rest of the journey, one hour walk, was done on foot using different shortcuts that cut through the hills and forest to Juma.

In his homily, the Vicar General cautioned the Christians of the cost of faithfully following Christ.  He said that just as Christ their Master was called Beelzebul, they too will be called names but that should not weaken their stance on following the way of Christ. He also encouraged the Catholic community of Juma and Sere Kayuni to be more united, support each other, as they grow into strong prayer centres.

Juma Catholic Community still meets as a small Christian community and are closely accompanied with support from Sere Kayuni Prayer Centre that is about 10 kilometres away.  They still do not have a proper Church building for their prayers.  They have elected a simple grass thatched shelter for this purpose.  They are a small Catholic community broken down as follows:

Acknowledging the need to support the Juma Catholic community to grow, the Vicar General gave some gifts, mostly catechetical materials, after the Eucharistic Celebration.  He gave a Tumbuka bible, Tumbuka hymn book, catechisms and liturgical calendars.  He also gave footballs, netballs and rosaries to Sunday school children of Juma.

The Vicar General has promised the Juma Catholic community another visit before the end of this year.  His next visit will be preceded with several visits by officers in the Pastoral Commission and the Christians of Sere Kayuni Prayer Centre as a way of continued support and monitoring of the growth of this young Catholic community.