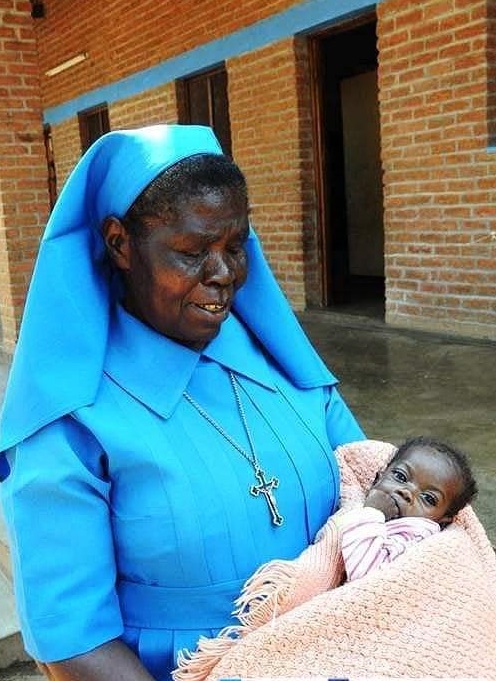 Sr Chipeta: children have the right to live to the full

Thousands of mourners from all walks of life on Wednesday afternoon thronged St. Mary’s Parish in Karonga District to pay their last respect and celebrate the life of their mother, mentor, teacher, founder and Director of Lusubilo Community Based Organization (LCBO) Reverend Sister Beatrice Chipeta who died peacefully in her sleep in the wee hours of Wednesday, June 19, 2019.

In his eulogy during the requiem Mass, Bishop Martin Anwel Mtumbuka of Karonga Diocese described the Late Chipeta as a humble, committed and dedicated servant of Christ who served the Lord tirelessly to put a smile on the less privileged, the vulnerable and orphans throughout her sisterhood.

“Much as we are shocked with her sudden death, we are proud of her because she dedicated her life to the Lord. She served God through various charitable activities that included paying school fees for many orphans, clothing and feeding them.

“And her death symbolizes that the owner of the Church is God Himself as all what she was doing will continue as whatever she was doing was Jesus Christ’s work,” Bishop Mtumbuka said.

Born in 1942 at Echiziweni in Mzimba, Sister Chipeta was baptized on September 23, 1958 at St. Denis Parish in Rumphi and took her vows as a religious sister in Sisters of Holy Rosary (Rosarian Sisters) congregation on December 8 1962 at Katete Parish in Mzimba where she taught for a long time.

She then taught at Kaseye Girls primary, St. Marys’ Primary School in Karonga and retired in 1993 as a teacher. Upon finishing a counseling course in Tanzania in 1997, she founded Lusubilo (meaning hope) CBO with an aim of sheltering orphans.

Today, the centre has grown tremendously and has shaped over one hundred thousand people in various skills ranging from nursery, primary, secondary school, tertiary education, modern farming techniques, nutrition, and vocational skills that include tailoring and carpentry in Chitipa and Karonga.

According to St. Mary’s Parish Priest Father Joseph Sikwese, Sister Chipeta was a darling to many and will be missed by boys and girls who were benefiting from her in terms of school fees as she was paying for many secondary school and college students’ fees.

“Sister Chipeta was an extra ordinary person. She was taking care of several orphaned girls and boys, providing them with food, clothes and all the necessities.

“And every Sunday after preaching in the outstations, she would go in the villages doing charity work and visiting the elderly. So, as a Church we have lost a strong pillar,” Father Sikwese said.

Taking his turn, Principal Group Village Headman Katolola said the surrounding villages have lost a true daughter and partner who took care of the orphans by giving them education, food, clothes and shelter regardless of one’s denomination.

Due to her hard work in charity, in 2010, Sister Chipeta was named a co-recipient of the US$1 million Opus Prize at Fordham Jesuit University in the United States of America.

Sister Chipeta went to Katete Primary School and then went to St. John Bosco Teachers’ Training College and finished in 1960. She then proceeded to Stella Maris where she studied economics and completed her studies in 1968.

She died a sudden death at the age of 77 and was laid to rest on Thursday at Katoto Cemetery in Mzuzu Diocese after serving as a religious sister for 57 years.

“Jesus Paid a Heavy Price for Our Salvation,” Bishop Mtumbuka