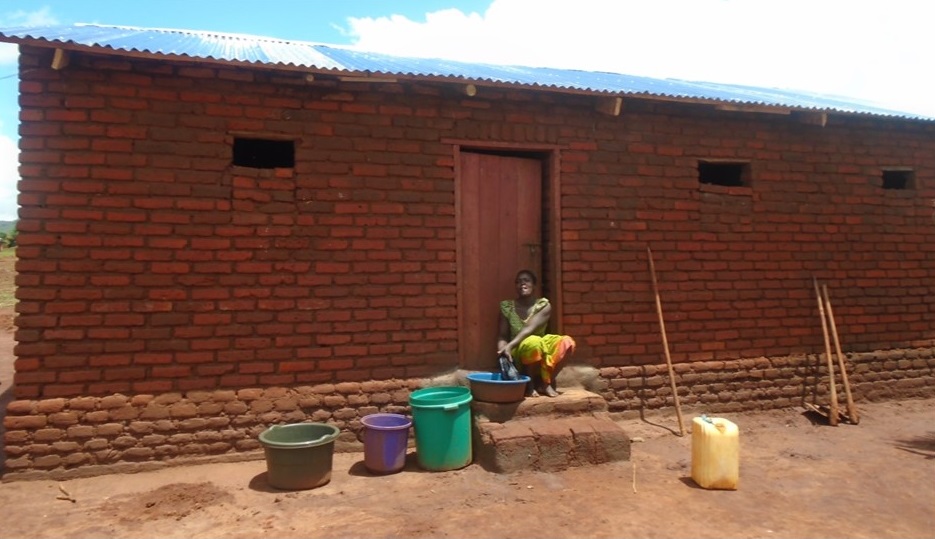 Tiness Silumbu was yet to live in a better house thatched with corrugated iron sheets since her birth and little did he know she would ever live in such a house when she joined a village savings and loan group in her village.

The Integrated Rural Development Project through the Diocese of Karonga mobilized communities to form village savings and loan groups to help households save money and access small loans.

It is from here that Silumbu joined the group in her village and started to buy shares and and borrow for her small business. She had shares amounting to 1500 Malawi Kwacha.

Using money borrowed from the village savings and loan group, Tiness Silumbu started to sell ripen bananas and tomatoes within her village and at the trading centre near her home.

“When I joined the village savings and loan group in my village, I thought it was a mere fallacy,”

“Then the Field Officer for the project explained to us the importance of joining village savings and loan groups,”

“Then our money grew and each member started accessing some loans from the group for our businesses”, narrated Silumbu.

Tiness Silumbu says that she used to borrow money from her group in the range of 10,000 to 15,000 Malawi Kwacha for her business and paid back the loan without problems and kept the profits.

She says that she realizes 7,000 to 9,000 Malawi Kwacha per market day which falls once a week. It is from here where Silumbu decided to invest her money into the construction of a house and managed to buy iron sheets.

“I could buy iron sheets little by little until I bought 36 iron sheets,” said Silumbu. She continued to say that some of the money was used to buy timber and nails for roofing.

She has now constructed a 3 bedroomed house with iron sheets from the proceeds of village savings and loan (VSL). She is also a community agent for VSL where she monitors other groups in the area.

“It is hard these days to access loans from people within our village and if you are given such loans, the interest rates are too high”, said Silumbu.

She continued to say that the formation of village savings and loan groups in the area has really helped her and fellow members to keep money and access some loans at low interest rates.

“The coming in of this project has really uplifted our lives, not only on village savings and loan but also in increasing our agricultural production through use of manure and management of natural resources,” said Silumbu.

Tiness Silumbu joined village savings and loan group in January, 2017. During sharing out of the money, she had the highest share of 62,000.00 Malawi Kwacha. She hails from Kapoka 4 village, Group Village Headman Mwenekapoka in T/A Mwenemisuku, Chitipa District. The group has 14 members, (11 women and 3 men). The Integrated Rural Development Project is implementing its activities in Traditional Authority Mwenemisuku, Mwaulambya and Mwenewenya in Chita District and Kyungu in Karonga District with funding from Misereor in Germany.